In order to provide accurate information to our residents, the Village of Carpentersville has created this page to answer some of the most common questions we are getting about the proposed development by US Capital on Randall Road.

Q. Why is the Village considering the approval of a truck depot for this property?

A. There has been no discussion or proposal, informal or otherwise, to place a diesel station or truck depot at that location. What is being considered is a possible warehouse/distribution center that would include light manufacturing, office space, and logistics. The developer has specifically stated that the design of the buildings would not be efficient for a pure distribution warehouse but rather is designed for companies interested in some onsite manufacturing and office space.

Here are some links to information related to the concept plan:

Q. Why would the Village consider this type of land usage on Randall Road?

A. Randall Road is a major north-south road designed for truck traffic. The property’s distance from I-90 makes it an ideal location for this use. The Village of Carpentersville has recently completed a year-long update to our comprehensive plan that specifically identifies the Randall Road corridor as a location for light industrial development.

Here is a link to our Comprehensive Plan:

In fact, a similar project is currently being proposed on Randall in Algonquin, and in 2020 the Village of West Dundee approved the annexing and zoned property for light industrial use, as shown on the marketing brochure from the real estate broker Lee and Associates, just south of the project being proposed in Carpentersville.

Here are some links to similar proposed projects: 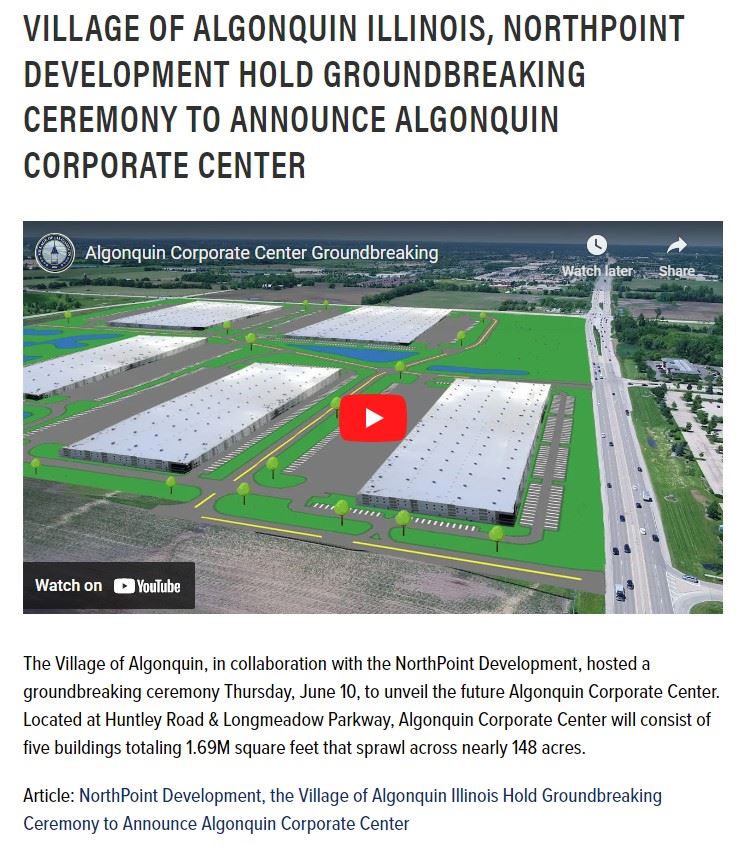 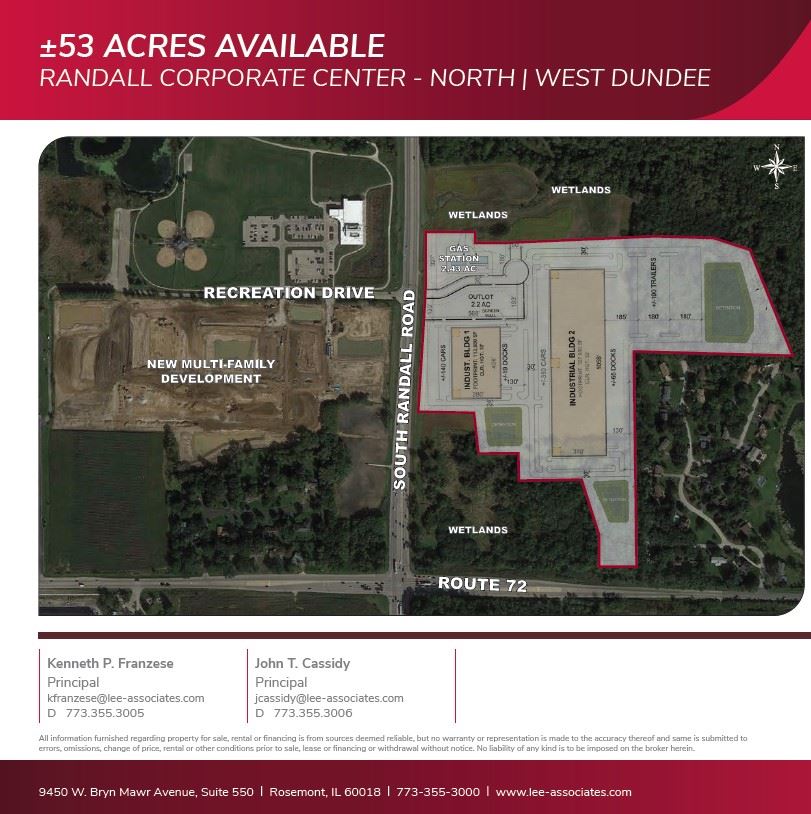 Q. Didn’t West Dundee and Huntley both reject this project?

A. No. According to conversations with representatives of the potential developer, US Capital, this is inaccurate. The developer had been looking to do a different project in Huntley but could not come to a sales agreement with the owner of the property. The Village of Huntley did not reject any project and Huntley has never had theoretical or actual jurisdiction over the subject property. Also, according to US Capital, conversations with West Dundee staff indicated West Dundee was interested in an almost identical development project at the same location by the same developer as what is being proposed in Carpentersville. West Dundee conditioned its interest on requiring an additional portion of the property to be dedicated for retail development. The current market shows little need for retail or office space in this area, and any concerns with additional development would have been exacerbated by West Dundee’s desired use of the land.

Q. Has the Village approved this project?

A. No, the developer US Capital submitted a concept plan application on August 11, 2022. As part of the Village process for concept review, a joint meeting of the Planning and Zoning and Village Board was held on September 13, 2022, to notify residents and other taxing bodies of the potential development. No actions were taken at the meeting and it was the first time either body had had a chance to see the proposal in a public forum.

Q. Why is there not more information about the proposed project?

A. The Village has publicly shared all information it has received, to date, from the potential developer regarding the concept plan. It is customary that a developer does not provide a greater level of detail until it submits its preliminary and final proposals. The concept plan and the presentation made by US Capital is available below. If the developer proceeds, its preliminary and final plans would be publicly accessible

A. No, the concept plan design and layout are a preliminary draft submitted by a developer to show that the proposed project can physically fit the land and the proper infrastructure is available to service the property. Should the developer move forward, it would need to submit a full set of drawings (that need to meet village standards) for the proposed buildings, along with information related to traffic, environmental, landscaping, stormwater, engineering, noise, lighting, and infrastructure improvements. Staff will then review and make recommendations and require changes as needed if the project is ultimately approved.

Q. Has the developer requested economic assistance for the building of the project?

A. No, there has been no request for the Village to provide funding or reduce fees for the development of this project. We are aware that a member of the public has stated a connection between this potential development and TIF funds, however, this area is not in a TIF District, and we cannot speak to the origin of that unfounded assertion.

Q. Who would be responsible for improving the infrastructure to service this development?

A. The developer would need to pay to upgrade the infrastructure that would serve the property and project. This includes roads, intersections, sewer, water, and stormwater detention.

Q. What are the next steps if this project moves forward?

A. Additional follow-up meetings would be scheduled before the Planning and Zoning Commission and Village Board, should the proposed project move forward; these would include:

Q. Will this project pave over all of the open space that currently exists on the property?

A. No, in fact, the proposed development shows that 60% of the entire space will be kept as open wetland space. The Village of Carpentersville has always committed to open space and currently has approximately 1600 acres of open space available for public use around our community which is proportionally more than almost any neighboring community. This does not include privately held open spaces. 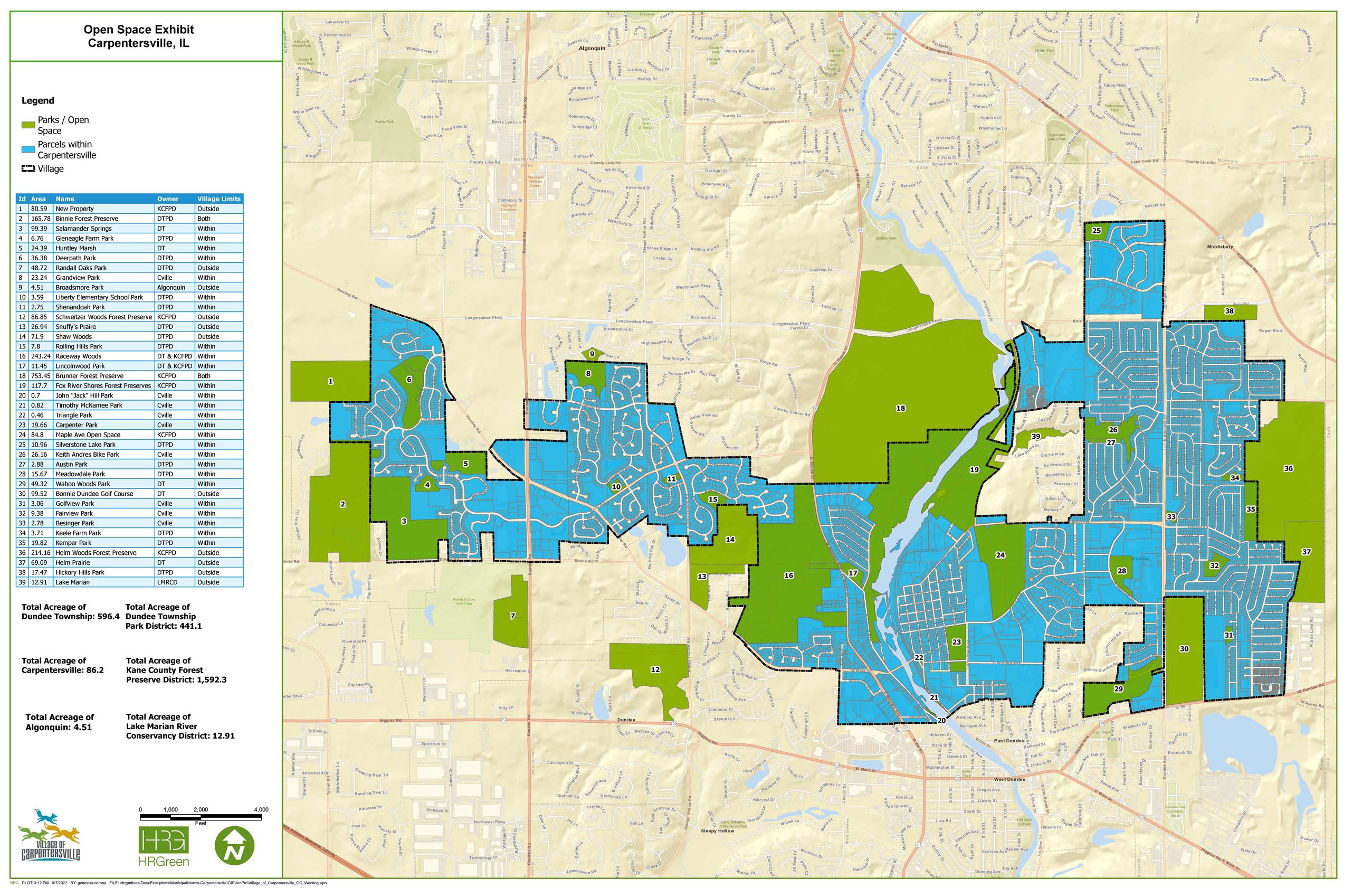 Q. Does the Village own the land?

A. The Village does not own the land which is currently owned by the Galvin family, and the property is not currently within Carpentersville’s municipal boundaries. The family is looking to sell the land to US Capital to develop, which would also include annexing into Carpentersville. The Village will not have any ownership interest in the property.

Q. What is the Village doing to protect the environment and concerns with diesel fumes?

A. First of all, there is no plan that contemplates the location being used as a diesel truck stop or as a 24/7 distribution warehouse. In fact, communities directly to the north and south have recently approved plans for what would be considered more diesel-intensive facilities. Second, part of the plan review is that the Village, utilizing consultants, will consider all aspects of the development from stormwater management to maintaining open space to mitigating noise and fumes, as well as overall aesthetics. The concept plan contemplates that there would be about a quarter mile between what would be developed from both the unincorporated Tara subdivision and Grand Pointe Meadows in West Dundee. The Village will also consider other features to mitigate any potential adverse impacts, such as open space dedication, landscaping requirements to provide adequate screening, stormwater detention areas, etc.