The purpose of the Community Enhancement program is to utilize funds collected from video gaming fees and use it to enhance the appearance and well-being of the community. The guidelines for this program were officially established by the Village Board of Trustees in February of 2015.

If you’re interested in submitting an idea, it’s recommended that you view the guidelines letter (PDF) from the Parks Commission.

Examples of eligible projects and programs: 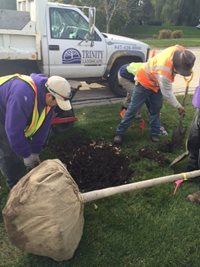 A $15,000 parkway tree replacement project was recommended and accepted by the Parks Commission and the Board of Trustees. The project had a particular focus on areas of the Village that were most impacted by the emerald ash borer - an invasive insect that has killed nearly 2,000 parkway trees. Once the Village determined which neighborhoods and streets were most impacted, a random lottery was established to place the trees within those areas.

As a result, 56 trees were planted in residential parkways throughout the Village. The competitively bid project provided an efficient way for the Village to beautify streets and enhance the attractiveness of areas most devastated by the insect.

The Holiday Decorating contest is a good example of a successful ongoing program funded through the Community Enhancement program. Program costs include the printing of awards and purchase of gift cards to local businesses for contest winners.

Ongoing programs do not involve the construction of fixed structures. Rather, they finance local activities that build a sense of community. Program ideas that will likely score high will appeal to a broad base of residents and encourage community involvement.